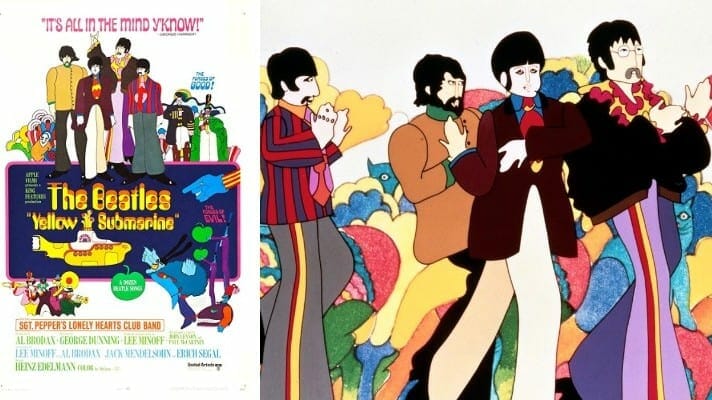 In this action plaintiff claims, inter alia, invasion of its rights of literary property in certain original artwork used in the production of the animated motion picture “Yellow Submarine,” of which it was the producer.

The cause of action substantially alleges that plaintiff is a producer of the animated motion picture “Yellow Submarine,” currently in theatrical distribution in this country and abroad, said motion picture being promoted and distributed by United pursuant to agreement with plaintiff; that in producing this film, plaintiff commissioned the creation of and used a large number of original animation cells and other artwork; that at all times pertinent, plaintiff was and is the owner of said original cells and artwork; that in connection with the promotion and distribution of the film, United, for plaintiff’s benefit, entered into an agreement with defendant Shopping Center dated July 16, 1968, for the use of the animation cells and artwork in a December 1968 promotion of the motion picture; that approximately 65,000 pieces of said cells and artwork were conditionally delivered by plaintiff to defendant Shopping Center pursuant to a letter dated September 19, 1968.

In 1966, the musical group The Beatles, through Subafilms, Ltd., entered into a joint venture with the Hearst Corporation to produce the animated motion picture entitled “Yellow Submarine”. Over the next year, Hearst, acting on behalf of the joint venture, negotiated an agreement with United Artists Corporation to distribute and finance the film. Separate distribution and financing agreements were entered into in May, 1967. Pursuant to these agreements, UA distributed the Picture in theaters beginning in 1968 and later on television.

In the early 1980s, with the advent of the home video market, UA entered into several licensing agreements to distribute a number of its films on videocassette. Although one company expressed interest in the Picture, UA refused to license “Yellow Submarine” because of uncertainty over whether home video rights had been granted by the 1967 agreements. Subsequently, in 1987, UA’s successor company, MGM/UA Communications Co., over the Producer’s objections, authorized its subsidiary MGM/UA Home Video, Inc. to distribute the Picture for the domestic home video market, and, pursuant to an earlier licensing agreement, notified Warner Bros., Inc. that the Picture had been cleared for international videocassette distribution. Warner, through its wholly owned subsidiary, Warner Home Video, Inc., in turn entered into agreements with third parties for distribution of the Picture on videocassette around the world.

In 1988, Subafilms and Hearst brought suit against MGM/UA, Warner, and their respective subsidiaries, contending that the videocassette distribution of the Picture, both foreign and domestic, constituted copyright infringement and a breach of the 1967 agreements. The case was tried before a retired California Superior Court Judge acting as a special master. The special master found for Appellees on both claims, and against the Distributors on their counterclaim for fraud and reformation. Except for the award of prejudgment interest, which it reversed, the district court adopted all of the special master’s factual findings and legal conclusions. Appellees were awarded $2,228,000.00 in compensatory damages, split evenly between the foreign and domestic home video distributions. In addition, Appellees received attorneys’ fees and a permanent injunction that prohibited the Distributors from engaging in, or authorizing, any home video use of the Picture.

Judgment: The cause is remanded to the panel for further proceedings consistent with the mandate of this court.  Vacated in Part and Remanded.