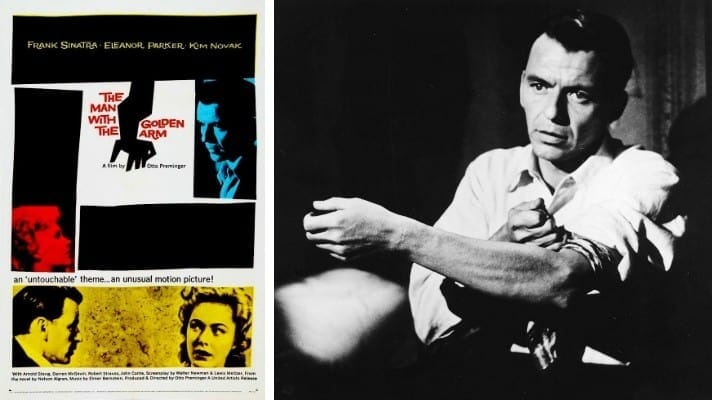 Appellants submitted the film The Man with the Golden Arm to the State Board of Censors for approval and license, and the Board found that one of the scenes violates the statute. This scene, which runs less than two minutes, shows Frankie Machine, a young Chicago tough, played by Frank Sinatra, taking a narcotic after six months in the United States Public Health Service Hospital for Drug Addicts at Lexington, Kentucky. Ostensibly he was cured, but all the pressures were there waiting for him. The scene shows him rolling up his sleeve, and tying a necktie around the upper arm, while a dope “pusher” prepares the drug for injection. While the particular kind of narcotic is not named, the picture shows the powdered narcotic, the liquid solution, the spoon, and the hypodermic needle. The “pusher” takes the filled needle and advances toward Frankie. The actual injection is not shown, but the viewer sees the needle being removed from the arm. Just before the needle is pulled out, Frankie indicates by a facial twitch that he felt a slight pain from the injection. Complete relaxation follows.

On January 12, 1956, C. Morton Goldstein, Chairman of the State Board of Censors, issued the following order: “Following Frankie entering Louie’s room and removing his coat, eliminate all views from the point where Frankie is shown rolling up his sleeve down to the point immediately preceding his reclining on couch.”

Appellants appealed to the Board for a re-examination of the film. The film was re-examined on February 8 by the chairman and the vice chairman, and on February 10 the Board passed another order sustaining its order of January 12.

On February 20 appellants appealed from the Board’s order to the Baltimore City Court. They attacked the statute as unconstitutional, and also charged that the Board’s order was arbitrary, capricious, and beyond its powers.

At the trial in the Court below, George J. Schaefer, sales supervisor for the producer of the film, testified that the film as presented to the Board had been passed by the censors without any elimination in every State, except Maryland, and had also been shown without elimination in England and on the Continent. He added that in Holland it received a scientific and cultural award resulting in the remission of admission taxes to patrons who viewed the picture.

Judgment: As the record in this case does not show that the censored part of the film violates the statute, the order of the Court below affirming the order of the Board will be reversed.  Order reversed, with costs.