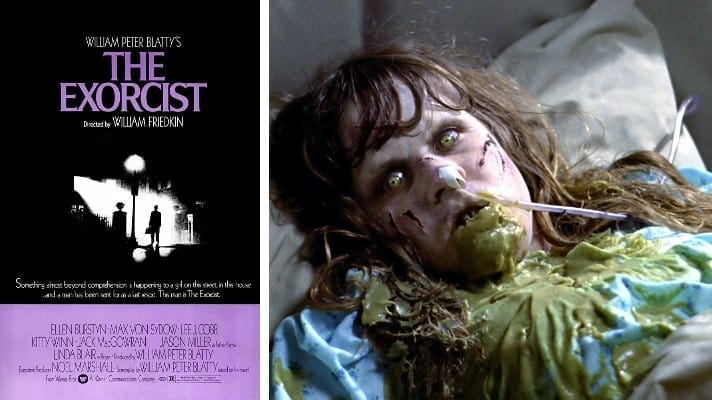 Plaintiffs have produced a film “The Exorcist” which has met with great public acclaim and has been said to be the most terrifying motion picture ever made. The producers contend that the film was produced at a cost of over $10 million and has grossed over $100 million by exhibiting it to more than 100 million viewers world-wide. In this action, plaintiffs sue the distributors and exhibitors of another film entitled “Beyond The Door” claiming that it infringes copyrightable subject matter contained in “The Exorcist.”

Before the Court is plaintiffs’ motion for a preliminary injunction to enjoin the alleged infringement of “The Exorcist”; to prevent future exhibition of “Beyond”; to prevent the use by defendants of advertising material which plaintiffs contend infringes a press book it prepared to exploit “The Exorcist”, and to compel defendants to deliver up its allegedly infringing material.

Plaintiffs bring one further complaint which has merit. Defendants, in advertising the picture “Beyond” use a letter “T” in the second word of the title which is intentionally designed to resemble a crucifix. “The Exorcist” has a basic religious theme where through faith the evil spirit is driven from Regan by priests. A crucifix is used as a part of the ritual. In an earlier scene, Regan, crazed by the possession, abuses herself sexually with a crucifix. Thus a crucifix is given great importance by the producers of plaintiffs’ film in the depiction of the girl’s agony and in the performance of the religious rite. The theatre public is aware of this. It is therefore a practice of unfair competition on the part of the exhibitors of “Beyond” a picture having no religious theme and which at no time portrays a crucifix, to prominently (or at all) display a crucifix in its advertising of the picture. There is thus created a suggestion that “Beyond” is a sequel to “The Exorcist” and possibly that it was produced by the same craftsmen who skillfully produced “The Exorcist”, and that it might be a film of the superior quality of “The Exorcist”, which it is not.

The defendants are directed to forthwith withdraw the use in any way or manner the advertisement or any other display of the name “Beyond The Door” using a cross or crucifix or any elongated form of the letter “T” as contained in the advertisement now in use and of the open door advertisement.  Such discontinuance of the use of these or any similarly deceptive ads shall remain in full force and effect until the further order of this Court.

Judgment: The petition to enjoin the continued exhibition of “Beyond” is denied but defendants are enjoined from the continued use of the advertisements mentioned hereinbefore.

This appeal arises from the Circuit Court of Forrest County as the result of the seizure by the state of the film “The Exorcist,” and the subsequent conviction of ABC Interstate Theatres, Inc., on the charge that the film was “obscene, indecent, or immoral”.

In April 1974 several police officers and a justice of the peace accompanied the district attorney to the Saenger Theatre, owned by the appellant, in the city of Hattiesburg, Mississippi, to observe the motion picture, “The Exorcist,” which was being shown to the public. Thereafter, affidavits were filed, warrants issued, the film seized and the theatre manager and projectionist were arrested. The charges against the manager and the projectionist were subsequently dismissed, but the corporate appellant was tried for publicly exhibiting an obscene, indecent and immoral motion picture

Judgment: Mississippi Code Annotated section 97-29-33 (1972), was enacted in 1920, has not been changed, and presently contravenes the Miller definition of the First Amendment and as such it is unconstitutional.