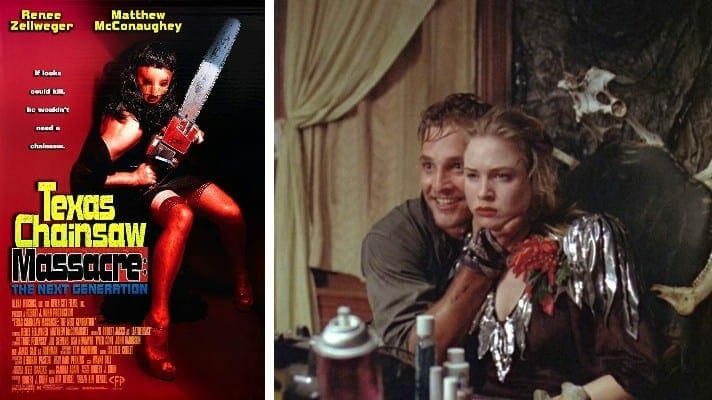 “Return of the Texas Chain Saw Massacre” (aka. Texas Chainsaw Massacre: The Next Generation) was filmed in 1993-94; then “obscure actors” Matthew McConaughey and Renee Zellweger acted in it.

In October 1995, Ultra Muchos and River City entered into a distribution agreement with Columbia TriStar Home Video, Inc. It was given exclusive distribution rights and complete discretion on how to exercise them; the producers were to receive a percentage of the movie’s gross revenue. And, by separate, earlier agreement, the owners were to receive a portion of the producers’ percentage.

In the period post-acting in the movie and prior to the fall of 1996, McConaughey signed an agency contract with Creative Artists Agency, L.L.C. The movie’s distribution was delayed by TriStar to take advantage of Zellweger and McConaughey’s success in subsequent movies. Subsequently, however, TriStar gave the movie only a limited distribution.

In late 1997, a few months after the voluntary dismissal of the first action, Grigson, now joined by Ultra Muchos and River City, filed this action in state court against McConaughey and Creative Artists for, inter alia, tortious interference with the distribution agreement, claiming that such interference occurred between McConaughey’s signing with Creative Artists and the movie’s limited distribution. In this regard, Defendants allegedly pressured TriStar to limit the release because they viewed it as an improper exploitation of McConaughey’s success post-acting in the movie.

Judgment: Solely at issue is whether the district court abused its discretion by applying equitable estoppel to compel arbitration for an action centered on tortious interference with a contract with an arbitration clause, brought by signatories to the contract against non-signatories, the court holding that, because this action is intertwined with, and dependent upon, that contract, its arbitration agreement should be given effect. We AFFIRM.

Texas Chainsaw Massacre - The Next Generation