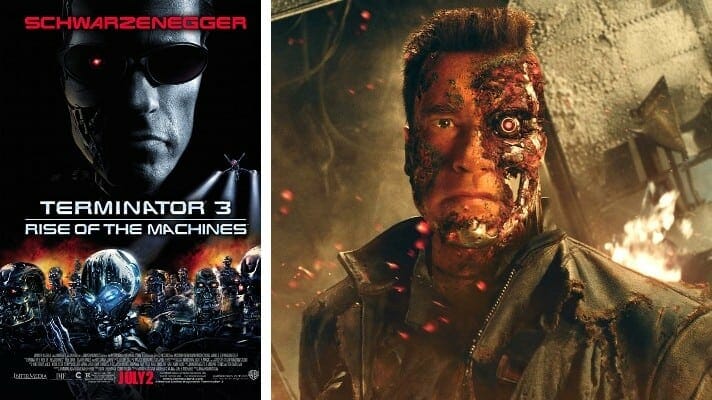 Plaintiffs Filia and Con Kourtis are authors of the concept of “The Minotaur,” an idea for a film. Plaintiffs claim that defendants James Cameron, international Creative Management (“ICM”), Jeffrey Berg, Joseph Rosenberg and Mario Kassar copied their idea for a shape-changing character when the defendants created the film “Terminator 2 & 3.”

Judgment: Plaintiffs shall take nothing.

According to Plaintiff Goldberg, James Cameron and Gale Anne Hurd, allegedly misappropriated plaintiff’s copyrighted works and used them in all three movies of the Terminator trilogy.  Plaintiff’s complaint alleges that The Terminator and its sequels infringe plaintiff’s copyrighted work. He implies that these movies are based upon his “Long Live Music” script and that they incorporate portions of his “Heavy Light” soundtrack.

Although Plaintiff alleges that a “secret conspiracy between defendant’s Cameron and Hurd” allegedly began in or around 1981 and 1982, plaintiff states that he was unaware that any copyright infringement of the work had occurred until within three years of filing his complaint because he “had embarked upon a spiritual Yoga path wherein [he] was not only removed from, and shunned, all forms of electronic media and, most certainly, any media and actual exposure to the Terminator movies.”

This trademark declaratory judgment action arises from a dispute over the mark TERMINATOR. StudioCanal, S.A., a French company, owns the famous TERMINATOR® movie franchise and trademarks.  Daniel S. Sinclair, Jr. has owned, since 2008, a business in St. Tammany Parish in which he uses TERMINATOR and also uses a stylized logo incorporating TERMINATOR.

StudioCanal sent a cease and desist letter to counsel for Sinclair, asserting superior rights in its trademark TERMINATOR®.  Five days later, Sinclair sued StudioCanal, seeking a judgment declaring that he has the right to use TERMINATOR as his trademark in connection with his business and that such activities do not infringe or violate StudioCanal’s rights.