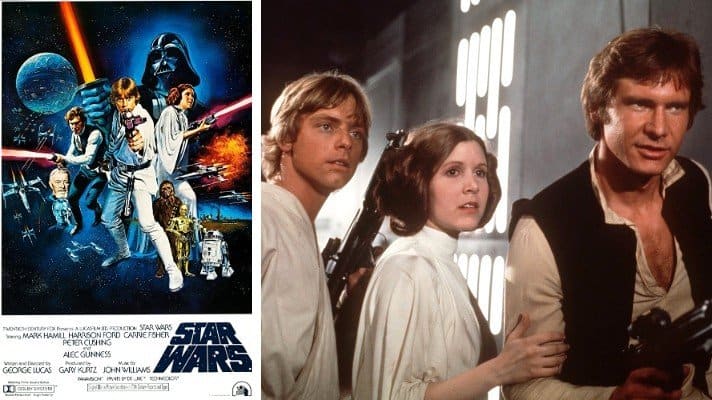 Appellants claim that their copyrighted production of the book and motion picture “Star Wars” was infringed by appellees’ production of “Battlestar: Galactica.”

In 1977, Twentieth Century-Fox produced and distributed the motion picture “Star Wars.” The commercial success of that venture did not go unnoticed. The following year “Battlestar: Galactica” was released as both a motion picture and television series. Universal Studios, Inc., a subsidiary of MCA, Inc., produced and owned the rights to Battlestar, and ABC televised the Battlestar space saga.

After viewing the Star Wars and Battlestar motion pictures, we conclude that the films do in fact raise genuine issues of material fact as to whether only the Star Wars idea or the expression of that idea was copied. At a minimum, it is a close enough question that it should be resolved by way of a trial.

Plaintiff Ideal Toy Corporation commenced this action in August of this year seeking a declaration that its production and distribution of certain toys — sold under the trademark “Star Team” — did not infringe any rights possessed by the defendants Twentieth Century-Fox Film Corporation (“TCF”), producer of the film “Star Wars,” and Kenner Products Division of General Mills Fun Group, Inc., holder of a license from TCF to produce toys based on characters from the film.

Plaintiff sought and obtained an order enjoining defendants from instituting parallel state court actions during the pendency of this action.  Before the order was entered, the defendants filed an answer and counterclaims, seeking injunctive and monetary relief from Ideal. They then moved for a preliminary injunction, contending that Ideal’s toys infringed TCF’s copyright in “Star Wars” and constituted unfair competition with “Star Wars” and with Kenner’s toys.

Judgment: The Court concludes that the defendants have failed to meet their burden of proof in that they have demonstrated neither probable success on the merits of any of their substantive claims nor the possibility of irreparable injury nor that the balance of hardships tips sharply in their favor. Accordingly, the application for a preliminary injunction is denied.

The suit arises out of MMG’s production and distribution of a pornographic animated film entitled “Starballz,” which is allegedly based on Lucasfilm’s “Star Wars” films and related properties.

Judgment: The Court DENIES Lucasfilm’s motion for a preliminary injunction, and the temporary restraining order entered December 18, 2001 is hereby dissolved.

In the real world of defense strategy and international politics, newspapers, politicians, scientists and spokesmen of allied and enemy nations have chosen to characterize the Reagan Administration’s Strategic Defense Initiative (SDI) as its “star wars” program. SDI seeks to develop defenses against a nuclear attack with weapons based in space somewhat reminiscent of those depicted in the STAR WARS movies. Some see SDI as a brilliant proposal full of promise. Others fear the idea will simply escalate the risk of nuclear war and frustrate efforts toward disarmament. An intense political debate is under way and still raging. Through persistent and prolific use in newspapers and magazines and over television and radio the phrase star wars has become a popular synonym for the SDI proposal.

Plaintiff disavows involvement in this political fray and wishes only to protect its business interest in the STAR WARS trademark. Plaintiff fears that associating STAR WARS with this political controversy will injure the valuable goodwill it has achieved by developing a mark associated with imaginary battles among fantastic creatures in distant worlds. Inevitably, the political debate identifies STAR WARS in some minds with devastation and death from uncontrollable nuclear escalation. Plaintiff urges this could detract from the public’s present association of STAR WARS with humor and fantasy. The goodwill value of the trademark is particularly threatened by defendants’ use of television advertisements that are attractive to young television viewers.

Plaintiff seeks to enjoin defendants’ use of the phrase star wars alleging trademark infringement, unfair competition, misappropriation, disparagement and a number of other similar business torts.

Judgment: In favor of the Defendants and the complaints will be dismissed.