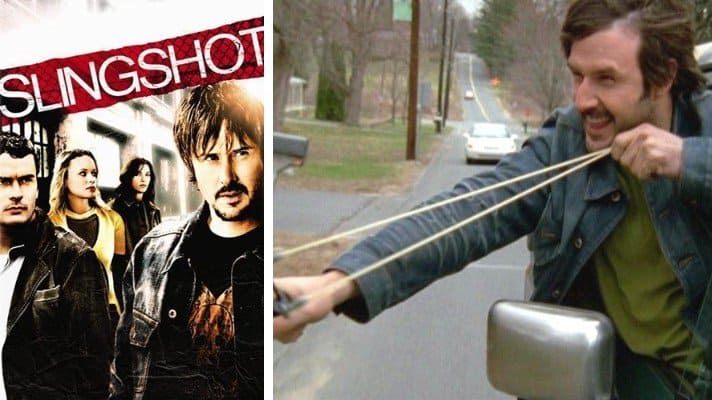 Plaintiff Matthew Quinn Martin wrote a screenplay for a film entitled “Slingshot.” On January 8, 2004, the plaintiff entered into a screenplay option and purchase agreement with the defendant Mercer Filmed Entertainment, LLC. The Agreement gave Mercer the right to purchase the screenplay from the plaintiff for 2.5% of the approved production budget of the film, less standard exclusions, up to a maximum of $100,000.00, plus contingent compensation in the amount of 4% of Mercer’s net profits “as and when net profits are received by [Mercer], if ever.”

Mercer and the film’s director, the defendant Jay Alaimo, formed Slingshot, Inc., in 2004 to film the plaintiff’s screenplay. On April 15, 2004, the copyrights to the film were transferred from Slingshot, Inc., to the defendant Bold Films. In 2006, Bold entered into a licensing agreement with the defendant The Weinstein Company, which gave Weinstein the exclusive right to distribute the movie on television and home video. The Licensing Agreement provided, “Bold shall be solely and exclusively responsible for the calculation, accounting and payment of any and all third party participations (whether in the form of percentage contingent compensation, deferments, bonuses or otherwise)… that become payable by reason of the exploitation of ‘Slingshot’ in the Territory, and [Bold] shall indemnify and hold [Weinstein] harmless with respect to any claims by any person or entity in connection with any such payments (emphasis added).”

The film premiered at the Tribeca Film Festival in 2004. It was released on DVD by Weinstein in 2007. It was also released as a Blockbuster exclusive, and Home Box Office broadcast the film on its network. Upon inquiry, Bold claimed that the film had grossed only $37,828.00 and that it had not made a profit. As a result, the plaintiff never received any contingent compensation for the screenplay.

The plaintiff commenced this action against Bold, Alaimo, Mercer, and Weinstein on February 8, 2012. The plaintiff alleges that the film has grossed $1.4 million in DVD sales alone since July 2010 and $14 million worldwide since its release. The complaint contains Causes of action for breach of contract, conversion, and fraud.

Judgment: ORDERED that this motion by the defendant Weinstein Company, LLC, for an order dismissing the complaint insofar as asserted against it is granted as to the second and third causes of action; and it is further ORDERED that the motion is otherwise denied.