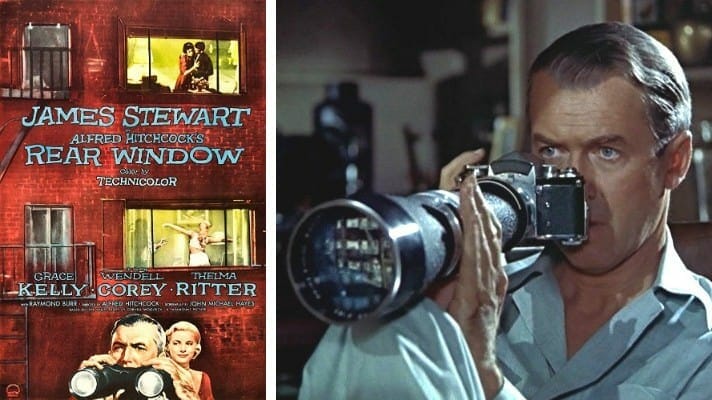 This case began under Abend v. MCA, Inc. and eventually went to the Supreme Court under Stewart v. Abend.

Cornell Woolrich authored the story “It Had to Be Murder,” which was first published in February 1942 in Dime Detective Magazine. The magazine’s publisher, Popular Publications, Inc., obtained the rights to magazine publication of the story and Woolrich retained all other rights.

The Copyright Act of 1909 provided authors a 28-year initial term of copyright protection plus a 28-year renewal term.  In 1945, Woolrich agreed to assign the rights to make motion picture versions of six of his stories, including “It Had to Be Murder,” to B. G. De Sylva Productions for $9,250. He also agreed to renew the copyrights in the stories at the appropriate time and to assign the same motion picture rights to De Sylva Productions for the 28-year renewal term. In 1953, actor Jimmy Stewart and director Alfred Hitchcock formed a production company, Patron, Inc., which obtained the motion picture rights in “It Had to Be Murder” from De Sylva’s successors in interest for $10,000.

In 1954, Patron, Inc., along with Paramount Pictures, produced and distributed “Rear Window,” the motion picture version of Woolrich’s story “It Had to Be Murder.” Woolrich died in 1968 before he could obtain the rights in the renewal term for petitioners as promised and without a surviving spouse or child. He left his property to a trust administered by his executor, Chase Manhattan Bank, for the benefit of Columbia University. On December 29, 1969, Chase Manhattan Bank renewed the copyright in the “It Had to Be Murder”. Chase Manhattan then assigned the existing rights in the copyright to Abend.

Abend, owner of the renewal copyright on the original story on which the motion picture “Rear Window” was based, brought suit against MCA and the trustees and executors of Alfred Hitchcock’s estate and assets. Abend’s complaint alleges copyright infringement based on defendants’ re-release of the “Rear Window” film in theatres, on TV, and on videocassette.

Judgment: We affirm the district court’s denial of defendants’ motion for summary judgment based on alleged defects in the story’s copyright and renewal.

The Sheldon Abend Revocable Trust brings this action asserting copyright infringement against Defendants, alleging that the motion picture Disturbia – a film produced by Spielberg, owner of DW Studios, LLC, which is in turn a wholly-owned subsidiary of Paramount Pictures Corporation and its parent company, Viacom, Inc. – infringed upon Plaintiff’s copyright in the short story Rear Window and upon the derivative Alfred Hitchcock film of the same name.