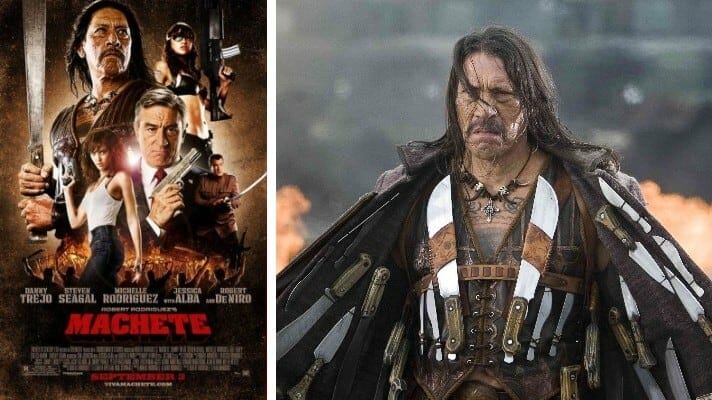 Machete’s Chop Shop, Inc. sued the Texas Film Commission; the Music, Film, Television, and Multimedia Office, Office of the Governor; Heather Page, in her official capacity as Director of the Texas Film Commission; and Greg Abbott, in his official capacity as Governor of the State of Texas, seeking declaratory relief regarding the Commission’s handling of Machete’s application for a grant from the State’s Moving Image Industry Incentive Program.

The Moving Image Industry Incentive Program is a grant program established by the Legislature and administered by the Music, Film, Television, and Multimedia Office for production companies that produce moving image projects in the state.

In 2009, Machete submitted an application for a grant in connection with its production of the feature film Machete. Thereafter, the Commission notified Machete that it had reviewed the application and “approved [it] for acceptance into the incentive program.”

After Machete was released in September 2010, Machete provided the Commission information verifying its final in-state expenditures, in-state production days, and employment of Texas residents. According to Machete, Hudgins resigned his position as the Commission’s director effective November 30, 2010. On December 1, 2010, the Commission’s deputy director, Carol Pirie, sent Machete a letter stating that “based on the final review of content, the feature MACHETE does not qualify for a grant from the Texas Moving Image Industry Incentive Program.” Pirie informed Machete that the determination not to award the grant was pursuant to Government Code subsection 485.022(e), which provided that the Commission “may deny an application because of inappropriate content or content that portrays Texas or Texans in a negative fashion, as determined by the office.”  According to Machete, Heather Page, Hudgins’s successor as the Commission’s director, ratified the denial of a Program grant based on Machete’s content.

Judgment: The trial court’s order granted the State Defendants’ plea to the jurisdiction and dismissed Machete’s suit for lack of subject-matter jurisdiction.

Machete is a new motion picture starring Robert DeNiro, Steven Seagal, Michelle Rodriquez and Jessica Alba based on the faux movie trailer from the 2007 hit Grindhouse. It is directed by Robert Rodriguez and produced by Machete’s Chop Shop, Inc. and Overnight Productions, LLC. Aaron Kaufman and Rick Schwartz are the principals of Machete’s Chop Shop and Overnight Productions.

Despite having successfully arranged surety services and bridge financing for Machete, Kaufman, Schwartz, Machete’s Chop Shop and Overnight Productions allegedly refused to pay 224 Entertainment either the fixed or contingent compensation and to provide the film credits as promised.

Judgment: Both Parties have settled the case in its entirety.

This diversity action is for breach of contract, breach of fiduciary duty and misappropriation of corporate opportunity against Overnight’s former president and chief operating officer Aaron Kaufman. Overnight is an independent motion picture production company run by Rick Schwartz. Among other things, Kaufman misrepresented his knowledge, skill and experience, pretended to be knowledgeable about the financing of motion pictures when he was not, secured financing for Overnight’s motion picture business by obtaining loans without consent on criminally usurious terms while at the same time giving away, also without consent, valuable guaranteed producer fees, credits and other compensation owed to Overnight.

Kaufman allegedly failed to arrange financing for the film Machete. At the last minute, Kaufman obtained a $750,000 loan from a pair of New Jersey businessmen, Gerald and Peter Fruchtman. But Kaufman was so desperate and reckless that he agreed — without Schwartz’s knowledge or consent — to pay a “financing fee” to the Fruchtmans of $45,000 a week until the loan was repaid. In other words, the interest on the $750,000 loan amounted to 312% a year. Such interest is criminally usurious under the law of the State of New York, which is the law that governed this loan.  Even worse, unbeknownst to Schwartz or anyone else at Overnight, Kaufman entered into a written agreement to pay a substantial finder’s fee to the third party broker who introduced him to the Fruchtmans.

Kaufman had also arranged a loan to finance an expected tax credit to be issued by the State of Texas. As it later turned out, the loan Kaufman obtained to finance the tax credit for “Machete” was declared in default when, as a result of Kaufman’s failure to make sure the conditions for obtaining the credit were met, the State of Texas exercised its right not to grant such credit, potentially costing Overnight hundreds of thousands of dollars in lost revenue.

Overnight has been damaged in an amount to be determined at trial, but which is believed to be at least $10 million, plus reasonable attorneys fees for which the prevailing party in any suit to enforce rights under these agreements is entitled to.

Judgment: Plaintiff Overnight LLC, hereby dismisses this action. This dismissal is without prejudice.

This dispute arises from a failed business relationship between Gil Medina and his erstwhile friend and alleged unwitting mark, actor Danny Trejo.  Defendants allege Medina purported to gain complete control of Danny Trejo’s career, through an “acting agreement.”  The Acting Agreement states that Trejo agrees to be the starring actor in a would-be franchise called ‘Jack’s Law’ (aka. Vengeance) films 1-5.  The Agreement purports to prohibit Trejo from “playing any vigilante characters that may hurt the ‘Jack’s Law’ films/properties or any films that may be similar to ‘Jack’s Law’ to the public.”

In the instant lawsuit for tortious interference, unjust enrichment, unfair competition and negligence, Plaintiffs allege that Defendants Hinojosa and AEFH, Trejo’s talent agents, conspired with Defendant Robert Rodriguez to copy and interfere with Plaintiffs’ “Vengeance” franchise by releasing two films entitled “Machete” and “Machete Kills.”  Plaintiffs further allege that Hinojosa and AEFH: (1) interfered with an alleged digital marketing campaign for the Vengeance franchise featuring Steve Wozniak, the co-founder of Apple by notifying him that Plaintiffs did not have a valid contractual relationship with Trejo; and (2) interfered with Plaintiffs’ relationships with “potential exhibitors and distributors” of the initial Vengeance film. Plaintiffs allege that as a result of Defendants’ actions, their plans to market and release “Vengeance” were “damaged” and that they lost “millions of dollars in revenues.”

Judgment: The Plaintiff’s case is Dismissed. Defendants’ claim for attorney fees is Denied.