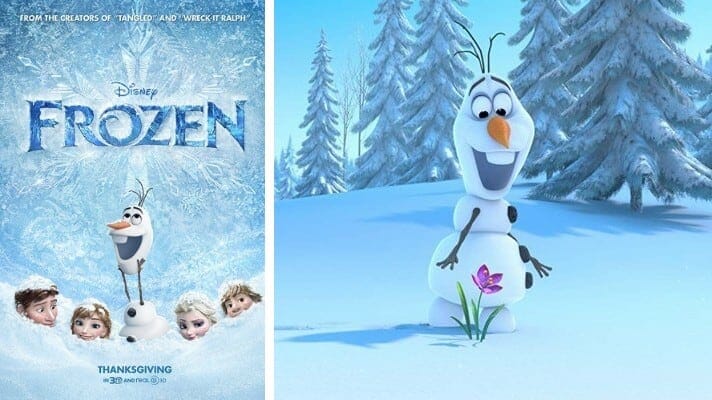 Plaintiff Kelly Wilson is the creator of The Snowman, a short 2D computer animated motion picture about an “average Joe” snowman who must battle a gang of hungry rabbits to save his carrot nose.  Plaintiff claims Frozen is substantially similar to The Snowman, and it is almost identical to the original elements of The Snowman, including, but not limited to: the plot, themes, dialogue, mood, setting, pace, characters, and sequence of events.

Judgment: Disney has settled the case with the Plaintiff under seal.

Plaintiff alleges her memoir Living My Truth was plagiarized by the film Frozen, which copied the story, characters, plots, subplots and storyline from Plaintiff”s Works — and sues for $250,000,000.

Judgment: The Plaintiff’s Complaint will be dismissed with prejudice because the similarities she alleges between her memoir and Frozen are not substantial. The two stories are entirely different.

Plaintiff alleges that she is suing the Defendants for “invading the privacy and creating profitable content in their products, message, and images related to Harry Potter, Frozen, Dog with a Blog, and other unnamed television shows and music.”  Although difficult to comprehend, it appears that Plaintiff claims Defendants stole her ideas for the movies Frozen and Harry Potter, among others. Plaintiff seeks $20 billion in damages, which needs settlement before her Presidential or Congressional run.

Judgment: The Plaintiff’s Complaint is dismissed.

Plaintiff Kimberly Mallett filed this complaint, alleging the films Brave and Frozen were written about her without her consent and alleges faith healer Peter Popoff sold this information about her that he gained through his ministry for his personal profit.

Mallett alleges that Peter Popoff and his ministry learned Mallett did not want to be married, then sold that information to Disney, who made the movie Brave about a young woman who does not want to be married, and later made the movie Frozen with another character Mallet believes is similar to her. The similarities of these films to her life have caused her spiritual distress and hardship in her personal relationships.

Defendant Phase 4 distributed the animated feature The Legend of Sarila theatrically under that title and then renamed the film FROZEN LAND for the home video release with nearly identical logos and fonts to Disney’s FROZEN — to allegedly create confusion in the marketplace and profit off the success of the Disney motion picture.

Judgment: The Parties have negotiated and entered into a settlement agreement that resolves the Action; Phase 4 Films shall immediately cease marketing and distribution of The Legend of Sarila as FROZEN LAND. Any further distribution, marketing, and/or promotion of The Legend of Sarila or related products, irrespective of format, shall be under the name The Legend of Sarila or another name not confusingly similar to or intended to create any association with FROZEN.  DEI (Disney) shall be paid as a settlement payment the amount of one hundred thousand dollars ($100,000.00).

Plaintiff alleges that Disney’s Frozen infringed her copyright in her children’s story “The Snow Princess.”

Judgment: The court grants the defendants’ motion to dismiss with prejudice.

Plaintiff Jaime Ciero is a musician of international acclaim and regard who has created and contributed to numerous critically and commercially successful compositions and songs. One of Ciero’s musical works, entitled “Volar,” was allegedly misappropriated by the Defendants and unlawfully copied and reproduced to create the global hit “Let it Go,” which was featured as the primary song in, and a narrative basis for, the feature film Frozen. “Volar” and “Let it Go” bear similarities so striking as to preclude the possibility that the latter song was independently created.

Judgment: This action is dismissed with prejudice; and, Each side is to bear its own costs and attorneys’ fees.