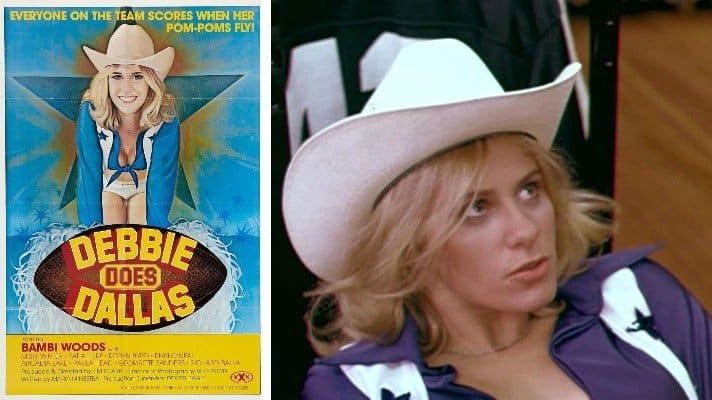 At all the football games and public events where plaintiff’s cheerleaders appear and on all commercial items depicting the cheerleaders, the women are clad in plaintiff’s distinctive uniform. The familiar outfit consists of white vinyl boots, white shorts, a white belt decorated with blue stars, a blue bolero blouse, and a white vest decorated with three blue stars on each side of the front and a white fringe around the bottom.

The main character of the film is Debbie, played by one Bambi Woods and Debbie appears in a uniform closely similar to that of the Dallas Cowboys Cheerleaders uniform. In this action plaintiff asserts that it has a trademark in its uniform and that defendants have infringed and diluted that trademark in advertising and exhibiting “Debbie Does Dallas.”

It appears that the “world premiere” of Debbie Does Dallas occurred at the Pussycat Cinema at 49th and Broadway, New York City, in October 1978. Plaintiff entertained the hope that the film would promptly pass out of existence and that no court action would be required. However, the film kept showing in New York City, and plaintiff learned of the arrangements for distribution elsewhere. Therefore this action was commenced.

Judgment: A preliminary injunction should be issued against defendant Zaffarano prohibiting further distribution and advertising of Debbie Does Dallas.