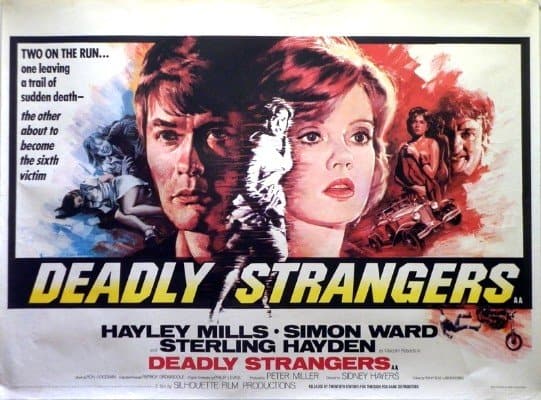 This is a tax dispute case involving the investors who funded the 1975 movie ‘Deadly Strangers’ starring Hayley Mills, Simon Ward and Sterling Hayden.  The case from the tax court lists the actual financial information pertaining to the movie — including the budget, revenue that the film earned and the amount of revenue the film would have to earn in order to make a profit.  Below is a brief breakdown of the expenses related to ‘Deadly Strangers’:

The movie would have to generate “distributor’s gross receipts” of $5,600,000 for the investors to earn a profit.

As of August 1975, ‘Deadly Strangers’ had generated $3 million in revenue through its distribution and advance sales.  Theatrical gross revenue was $225,000 in 1975 and in 1976, the revenue was only $415. The movie was not rated by the MPAA, whose records revealed that no rating application was filed. The majority of the commercial theaters in the United States would not exhibit the movie because it was not rated by the MPAA.

The investors retained a total of only $43.58 from the total revenue realized from “Deadly Strangers” from the time of its release in 1975 until 1985.