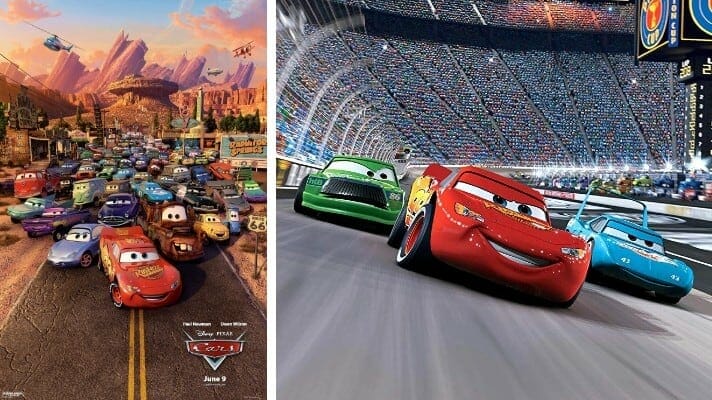 Judgment: The Court GRANTS Defendants’ Motion to Dismiss all causes of action with prejudice. Judgment shall be entered in favor of Defendants against Plaintiff.

Plaintiff’s claims are based solely on his belief that Disney and Pixar based “Lightning McQueen,” the lead character in “Cars”, on the Plaintiff Mark Brill, and the Plaintiff’s racing car.

Brill contends Defendants’ use of Lightning McQueen constitutes common law trademark infringement because of his prior use of the image of a red race car with the number 95.

Judgment: The trial court grants summary judgment to the Defendants.

Plaintiff Collectable Promotional Products, Inc. alleges that, in 1998, it obtained a federal trademark registration for “Real Cars” and a logo including that phrase superimposed over a chevron design. Its trademark registration described the goods covered as miniature automobile toys. CPP contends that Defendants have infringed its registered trademark by producing, marketing and distributing toy cars bearing Defendants’ 2006 trademark obtained in connection with the manufacture and distribution of items, including miniature automobile toys, related to the Disney motion picture “Cars.”

Judgment: Defendants’ Motion for Summary Judgment is DENIED. The case will proceed accordingly.

Five years after CARS was released, Plaintiff Jake Mandeville-Anthony filed this action claiming Defendants’ three CARS works are substantially similar to his Cookie & Co. and Cars/Auto-Excess/Cars Chaos works, which he allegedly created twenty years ago, but only registered with the U.S. Copyright Office last year.