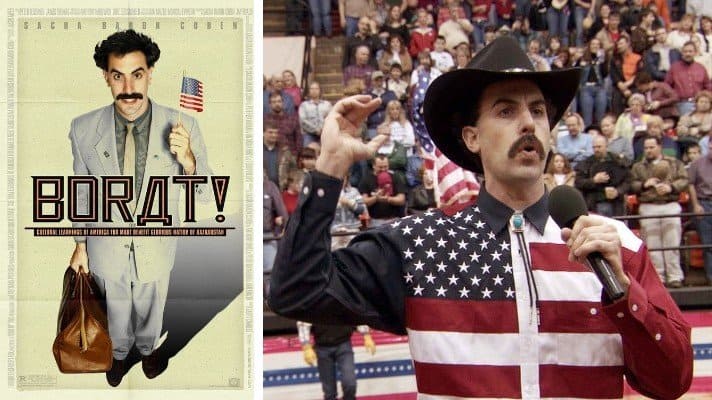 This diversity action arises from defendants’ allegedly illegal and unauthorized use of plaintiffs likeness in the film “Borat: Cultural Learnings of America for Make Benefit Glorious Nation of Kazakhstan”.  Each of the defendants was responsible for and participated in the filming, production, or distribution of the Borat film. Plaintiff was allegedly fraudulently induced to appear in the Borat film, and plaintiffs likeness and persona have been used extensively to promote and advertise both the theatrical and DVD releases of the film in violation of Civil Rights Law.

Defendants have attempted to shield their conduct with a document they call a “Standard Consent Agreement,” which they allegedly fraudulently induced plaintiff to sign. Plaintiffs claim the document should be declared void, and defendants should be found liable for actual and punitive damages.

Judgment: The Plaintiffs’ complaints are DISMISSED.

This action arises from the brief use of Plaintiff’s image in Defendant’s film Borat: Cultural Learnings of America for Make Benefit Glorious Nation of Kazakhstan.

The scene, at issue in this litigation, shows Borat, with a heavily accented voice, greeting Plaintiff on the corner of 5th Avenue and 57th Street in Manhattan. Approaching Plaintiff, Borat extends his hand and says: “Hello, nice to meet you. l’m new in town. My name a Borat.”  Before Borat can finish his greeting, however, and without further provocation, Plaintiff begins to run away in apparent terror, screaming “Get away!” and “What are you doing?”  The 13 second clip concludes as Borat responds, “What is the problem?”  Defendants never obtained consent to use Plaintiff’s image, which appears twice in the movie and once in its trailer advertisement.  In the trailer, Plaintiff’s face is scrambled, rendering his likeness “blurry” and indiscernible; his face is not scrambled in the film itself.

Judgment: Defendants’ motion to dismiss the complaint must be GRANTED.

[Combined Cases] Plaintiffs come before the Court as victims of an unlawful and fraudulent scheme committed by the Defendants. Sarah Moseley, Ben McKinnon, Michael Jared, Lynn Jared and Cindy Streit, the latter of whom owns the etiquette training business, Etiquette Training Services, Inc., were unknowingly and unwillingly made subjects of the recent movie “Borat: Cultural Learnings of America for Make Benefit Glorious Nation of Kazakhstan”, an R-rated film containing depictions of racism, child pornography, sexism, nudity, anti-Semitism and vulgarity.

Defendants fraudulently represented that they were filming an “educational documentary for Belarus Television” and requested that Cindy Streit provide etiquette and dining skills training to a “foreign dignitary” from the Republic of Belarus. Defendants also requested that Streit and Etiquette Training Services, Inc. arrange a dinner to be attended by the “foreign dignitary,” Streit and other attendees of Streit’s choosing, which included Plaintiffs Sarah Moseley, Ben McKinnon, Michael Jared and Lynn Jared, among others. Defendants filmed both the etiquette training and dinner. Unbeknownst to Plaintiffs, the “educational documentary” was actually the highly offensive Borat movie and the “foreign dignitary” was actually the actor/Defendant Sacha Baron Cohen who, along with all other Defendants, had conspired to subject the Plaintiffs to Cohen’s lewd, insulting and offensive conduct, all while casting Plaintiffs as racially intolerant. Unlike actors and actresses who are paid for their services and perform according to an agreed-upon role and script, Defendants defrauded Plaintiffs for their part in the film