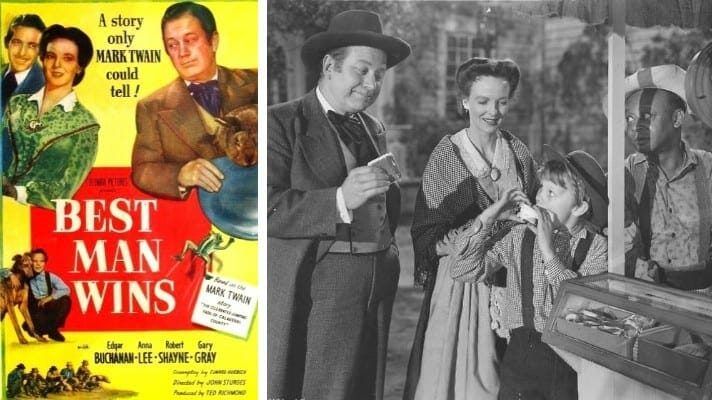 The complaint alleges that appellee has been exhibiting throughout the United States a motion picture produced by defendant entitled “Best Man Wins,” and advertising this picture in such a way as to give the impression that Samuel L. Clemens (pen name Mark Twain) wrote the story, in that appellee’s advertisements say their picture is “A Story only Mark Twain Could Tell,” “Mark Twain’s Favorite Story,” “Mark Twain’s Tale of a Gamble in Hearts,” and other similar statements. It is alleged that Clemens never wrote a story entitled “Best Man Wins,” and that the motion picture bears only slight resemblance to the Mark Twain short story, “The Celebrated Jumping Frog of Calaveras County.”

It is further alleged that the picture “Best Man Wins” is “an inferior motion picture photoplay,” which “tells a very common, ordinary and what is commonly characterized in the motion picture theatrical industry as a `corny’ love story.” Further, it is alleged, that the quality of this picture, coupled with the representation that the story was written by Clemens, has depreciated the value of those literary works of Mark Twain which are protected by copyright and of the trade name “Mark Twain,” in connection with its use in other commercial enterprises. (Since the “Jumping Frog” is in the public domain there is no claim of copyright infringement.)

The prayer of the complaint is for an injunction against further misleading advertisements, an accounting of the gross receipts in connection with the motion picture, damages and other appropriate relief.

Judgment: Dismissed appellants’ complaint on the ground that it did not state a cause of action.