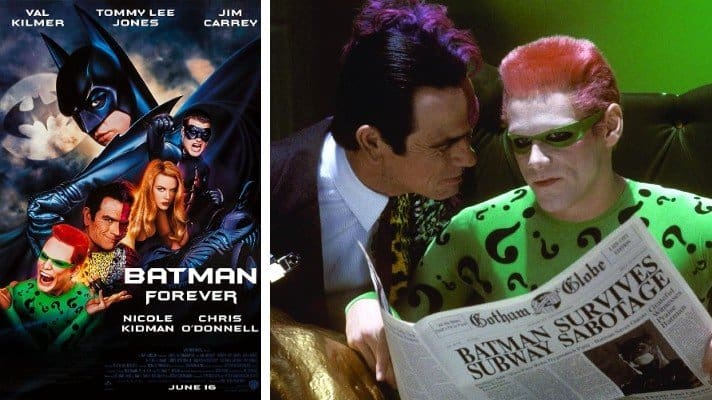 In 1994, the 801 Tower in downtown Los Angeles and four towers that form its streetwall on the south side of the building became the Second Bank of Gotham in Batman Forever. Andrew Leicester, an artist known for large scale public art, claims copyright protection for these towers along with other artistic works he created in a courtyard space called the Zanja Madre. He registered the whole of Zanja Madre as a “sculptural work” and sued Warner Brothers for infringement.

In July 1994, Warner Bros. obtained written permission from R & T to use the premises of the 801 Tower for filming Batman Forever. Leicester and the architect were not consulted, nor was the Zanja Madre mentioned in the agreement although the parties understood that Warner Bros. would film the property line along Figueroa. The 801 Tower and the two lantern towers and two smoke towers in the streetwall appear briefly as background in a few scenes in the movie. The building is the Gotham City bank where nefarious deeds occur before Batman comes to the rescue. The balance of Zanja Madre — the vampire tower and the courtyard portion — do not appear in the film. In addition, Warner Bros. built a miniature model of the 801 Tower that included a miniature of the Zanja Madre for a special effects shot, and the two lantern towers and two smoke towers along with the building were shown in the videotape taken from the movie as well as in some promotional items.

Leicester registered the Zanja Madre for copyright as a sculptural work in 1995 and brought this suit against Warner Bros. for copyright infringement, unfair competition, and interference with prospective business relations.

Judgment: The court concluded, pictures taken of the streetwall towers along with the 801 Tower are not infringing pursuant to the exemption for pictorial representations of buildings in the Architectural Works Copyright Protection Act of 1990. 17 U.S.C. § 120(a).