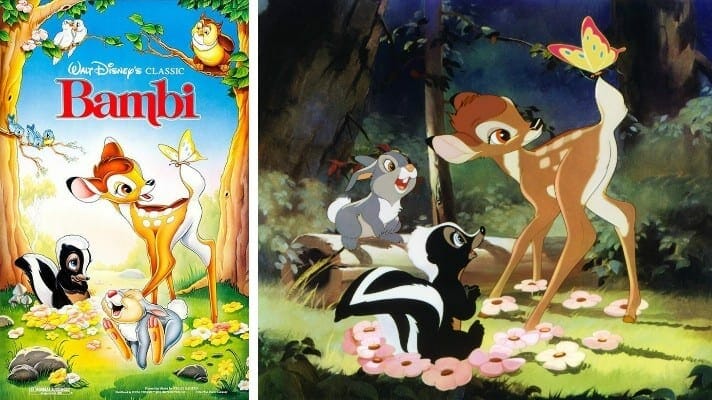 This lawsuit involves the children’s classic tale, Bambi, A Life in the Woods. It is a very common misconception that Bambi was the brainchild of the world’s foremost entertainer of children, Walt Disney. To the contrary, the young fawn named Bambi was brought to life in Austria by an Austrian citizen named Felix Salten, and was born in the wooded wilderness of Germany in 1923.

On December 3, 1936, Salten and his publisher assigned certain rights in the Bambi book to Sidney Franklin, who then in 1937, assigned his rights in Bambi to Walt Disney (Disney). Disney made an instant star out of Bambi, first releasing the animated Bambi movie in 1942. The movie has been re-released seven times, and Disney has very successfully marketed numerous Bambi products, including video cassettes, toys, and books based on the Bambi story.

The author Salten died in 1945. His daughter and heir, Anna Salten Wyler, renewed the U.S. copyright on Bambi in 1954. In 1958, Anna Wyler negotiated and executed three agreements with Disney concerning her rights in Bambi. Anna Wyler died in 1977, leaving her husband Veit Wyler as her sole heir and successor to her right in the literary properties of her father, the author Salten. In 1993, Veit Wyler and his two children assigned all their rights in Bambi to the Plaintiff Twin Books.

Disagreements arose as to the rights of the parties under the 1958 Wyler-Disney agreements, and Plaintiff then initiated this action.

Judgment: We reverse the district court’s findings that the initial Bambi copyright was secured and commenced in 1923, that the 1954 renewal of the copyright was untimely, and that Bambi fell into the public domain in 1951. Accordingly, we reverse the summary judgment in favor of the Defendants. The cause is remanded to the district court for further proceedings consistent with this Opinion. REVERSED AND REMANDED.