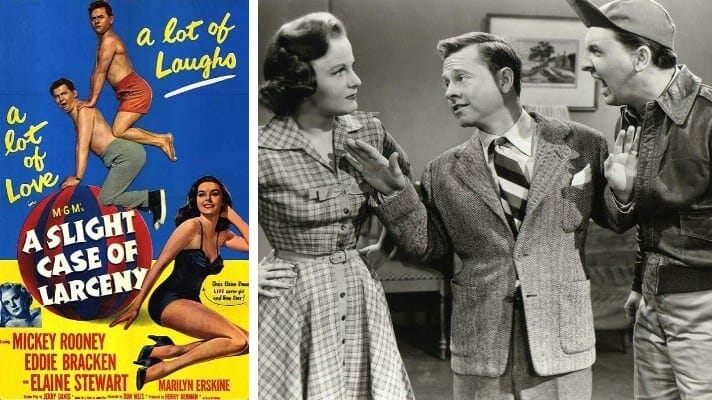 On January 8, 1952, Rooney and MGM executed a contract covering the photoplay “A Slight Case of Larceny”. Paragraph 11 of that contract provided:

“We [MGM] shall have the right to photograph you [Rooney] and your performances, and thereby or otherwise to reproduce your likeness and any and all of your acts, poses, plays and appearances of any and all kinds hereunder, by any present or future methods or means, and the right to record your voice and all instrumental, musical and other sound effects produced by you hereunder, and to reproduce and/or transmit the same, either separately or in conjunction with such acts, poses, plays and appearances as aforesaid, as we may desire. We (and our successors and assigns) shall be entitled to and shall own solely, exclusively and perpetually, all rights of every kind in and to all of the foregoing, and in and to all other results and proceeds of your services hereunder, without restriction or limitation of any kind, including (but not limited to) the sole, exclusive and perpetual right to reproduce and rerecord all or any of said photographs, reproductions and recordations, by any present or future methods or means, and to perform, exhibit and reproduce said photographs, recordings and reproductions or any of them at any time or times, either separately or in combination, in and in connection with said photoplay and otherwise, and in combination with photographs, recordations and reproductions of or made by any other person or persons. You hereby transfer and assign to us all of the results and proceeds of your services hereunder, and all rights therein, including but not being limited to, the rights specified above, without reservation, condition or limitation of any kind.”